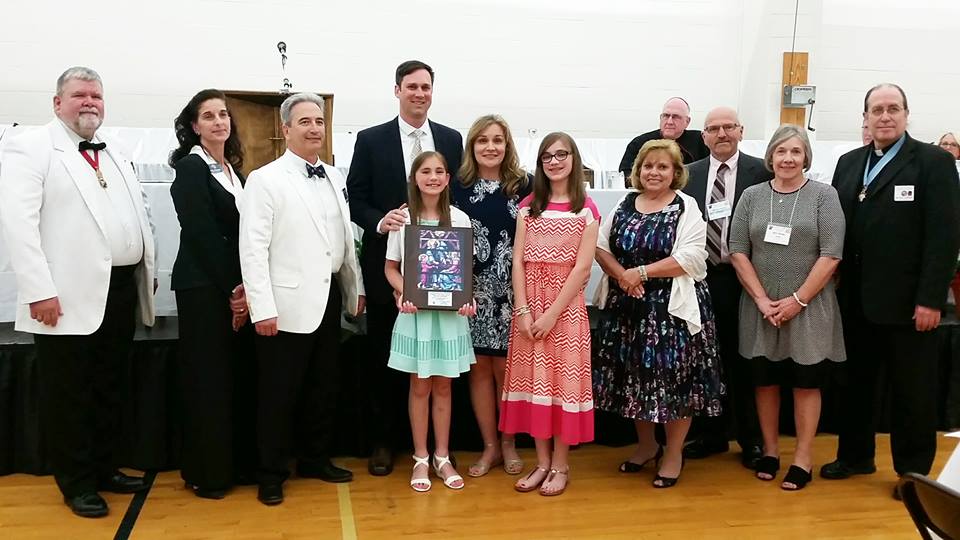 The Stewarts were named Family of the Year for the state by the Kansas Knights of Columbus this past weekend.  They are active Stewards, involved in parish life, the school, the Knights of Columbus, and the wider community.  Scot is  member of a Knights breakfast team, and coordinates fellow Knights to set up for parish blood drives. Scot and the girls participate in our annual Tootsie Roll Drive and Kids Fishing Derby.  Scot is an usher; he and Michelle are Eucharistic ministers, and Hayley and Claire altar serve. Hayley trains and guides new altar servers (Anna will soon be one). The family serves as greeters and gift bearers. It is important to them to attend Mass as a family and to participate fully. In addition, they have had a weekly Adoration hour since perpetual Adoration began at St Mary. Shortly after moving to Derby in 2010, Claire, 6 years old at the time, was diagnosed with stage 3 non-Hodgkin’s lymphoma. This began a journey that has defined the Stewart family and illustrates their commitment to helping others. The Stewarts approached this challenge with faith in God and a determination to help others facing similar challenges. Michelle quickly organized support for the Leukemia and Lymphoma Society. Claire’s Krewe was Stewart family receives state award formed, and the parish and community rallied behind the Stewarts. With 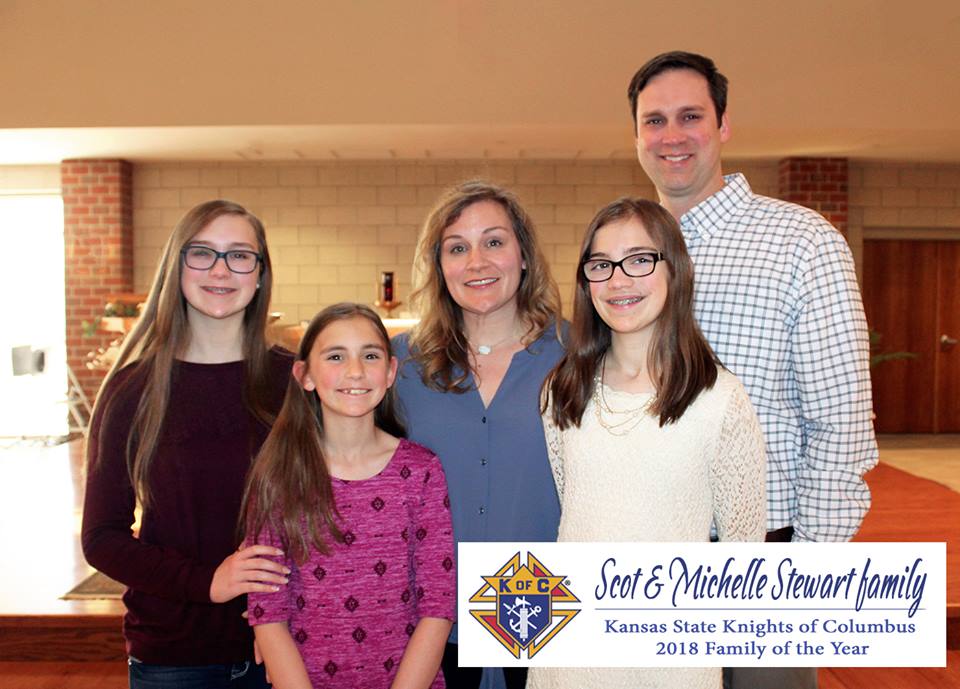 Michelle’s leadership and drive, Claire’s Krewe has raised over $60,000 for LLS, for research and patient support services. Claire has been the honored patient and a speaker at many events, including as LLS Girl of the Year for 2015. Claire tells her story and advocates for LLS research. In addition, she has written a children’s book about her battle, and donates all sales proceeds to support families fighting cancer. The Stewart family’s community involvement doesn’t end there. They nominated their close friend, Darin Byer, as the 2017 LLS Man of the Year – an annual fundraising effort where Man and Woman of the Year nominees compete to see how much money they can raise. The entire Stewart family took part in Darin’s campaign – manning fundraisers, writing letters, etc. With Michelle and Jaime Byer, Darin’s wife, leading the campaign, over $100,000 was raised to fund two research projects specifically geared toward childhood blood cancers. When the Stewart family was faced with a devastating illness, rather than say “Woe is me,” they put their faith in God and worked for not only their daughter’s recovery, but for every other child facing similar challenges. Their faith and efforts galvanized our whole community and created a can-do attitude within our parish to fight. As other children in our parish have faced similar illnesses, our parish has risen to the challenge and supported these families in a tremendous way.

St. Mary Council 4458 in Derby, Kan., earned the International Youth Activities Award by sponsoring a year’s worth of activities for the young people of their parish and community. State Deputy and Mrs. Mark Roth join Past Grand Knight and Mrs. John Washburn as they accept the award on the council’s behalf.

Eighty members of St. Mary Council 4458 in Derby, Kansas – representing 20 percent of the membership – contributed 475 hours to provide an activity each and every month for the young people of their parish and community.

The goal of Grand Knight John Washburn was to provide a series of healthful activities for the youngsters, while promoting a positive attitude for the Knights of Columbus goals of charity and family values.

Through these program activities, St. Mary Council kept the young people and their families engaged throughout the year, dramatically increasing the visibility of the council and generating significant good will in the community. 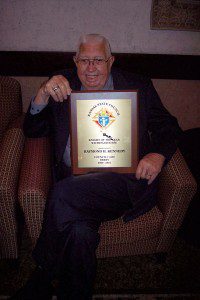 Raymond Kennedy holding up is State Knight of the Year Award in the lobby after receiving it at the State Convention.

Theme by Anders Noren — Up ↑